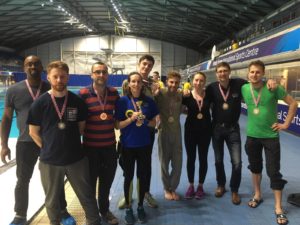 In spring, two members of the Wahoo family set out to seek their future further away from the mountains but closer to the sea, in London.Compared to Zurich, London’s dimensions and commute times are shocking. The hockey opportunities are abundant, though. Within an hour, the standard commute time in London, hockey takes place 11 times per week! You can choose between a flat 2m pool or the 3.8m dive pit to prepare for deeper tournaments. The skill levels vary highly as well, from complete beginners to training sessions, were you are guaranteed to play along some players of the GB national teams.

With that many players, national tournaments are also a must. And one of those took place end of November. So, teams needed to be picked. The two Wahoos chose differently, determined by ease of commute to training, level of play, personal connections and so forth. Julia settled for St. Albans and Philipp picked West Wickham were he played for the B team. Next to the two playing Wahoos, two additional members of the Wahoo family, Silvania and Martin, joined the tournament as referees.

Both teams, St. Albans and West Wickham B were seeded in the 4th out of 6 divisions and had the ambition to be promoted to next higher league, which the two top teams of each division are. While West Wickham B had a straight walk through all the games, St. Albans started with a loss, against West Wickham B, and a tie. St. Albans held together, though, and fought back winning all other games. After a tough day that meant place 2 for St. Albans and place 1 for West Wickham B. The promotions were achieved and Julia and Philipp went back to London with a silver and a gold.

Keep up all the good work Wahoos!
You are always welcome to hop over to the island and play some hockey.