On the weekend of the 25/11/2018 two Wahoos played with Franconville 2 in the Ile-de-France Regional League A (DAM) in Aubervilliers. They were competing against 3 other teams : Lagny, Diderot (Paris), Le Chesnay. Actually these three teams are playing in the French National League first division (D1)  whereas Franconville 2 plays in the French National League second division (D2 – where we finished 2nd last year). Let’s just say that for us it was quite a challenge to compete against them, but we knew we had a chance if we played our best hockey! 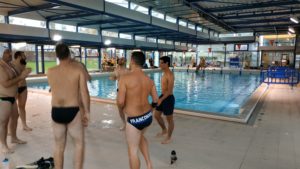 First game of the day, I think we were not properly warmed up and to relaxed when we entered the game… They quickly scored after 2 minutes … They were playing faster and were relying a lot on their back line. Our forward line was not chasing their back line and our backs were not able to stop their progress. They put 3 more goals during the first half giving a score of 4-0.

The second half was different, we were very annoyed to have been so weak during the first half and after that the captain said some words we finally managed to compete against them, they were still quick but we did a good job and even scored in the last minute of the game. Final result 4-1.

It was the strongest team of the day, and looking at the results against Lagny we were not so confident. But the forwards had one main task : chase their backs and center back. Everyone was doing their job and it worked pretty well but they managed to score on a good opportunity. We kept playing our hockey and even with a strong team in front we did a very good job and finally managed to score ! 1-1 ! The second period was tense, we were tired but we held on doing the job leading to a final score of 1-1 ! 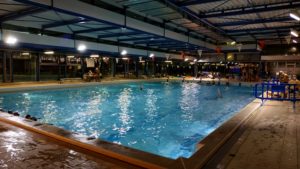 Since two years we were playing against Le Chesnay, we know them, they play roughly (like us) and they have experienced players. We started this game with the same spirit and with the same instructions. They played smartly, they didn’t play on the walls but played one and a half meter away from it, allowing them to make breakthroughs in the center of the swimming pool where our back line wasn’t prepared to defend. They scored first, but we kept playing and chasing their back line and with a good job from our back line we managed to score 1-1. On the second half the game was tough and started to get aggressive, at some points one of them was sent out and we used this opportunity to score 1-2. We kept playing and having good opportunities but we were getting tired and not managing to score… At some point we were in their corner but they fought back and swam back all the way to our goal and scored 2-2. We didn’t manage to put another goal and the game finished with this score.

We were a bit disappointed but looking back at the teams and comparing with the first game we did a good job with this game. Finally we were all quite happy with this competition.